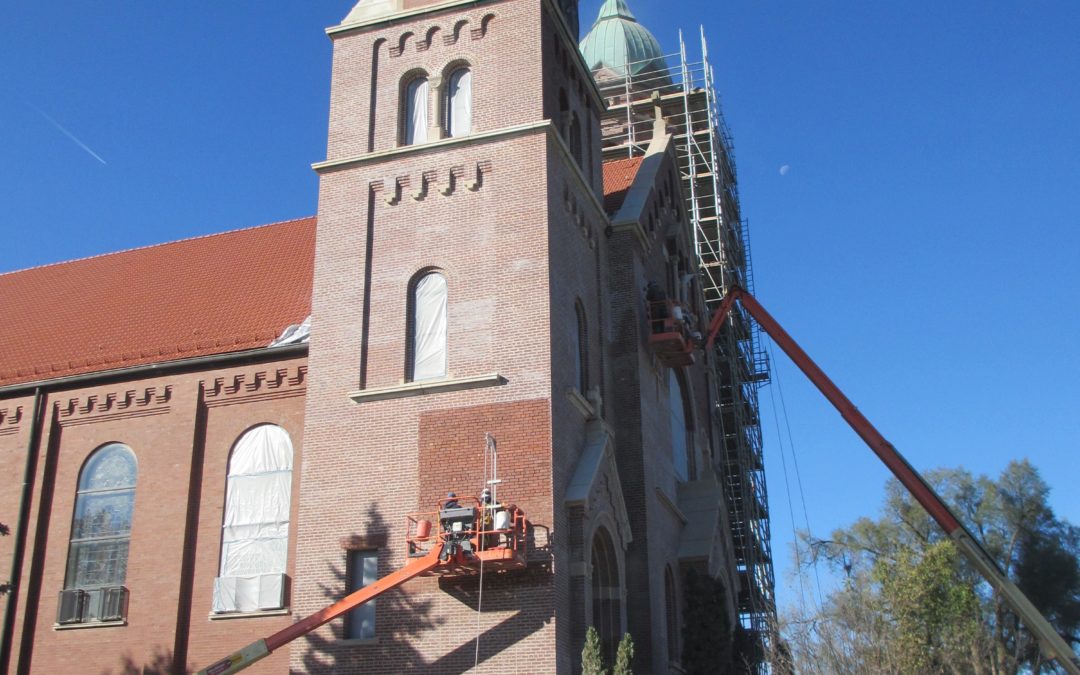 1. Saint Joseph’s College was chartered by the Society of the Precious Blood, a community of priests and brothers, in 1889 and located at 1498 South College Avenue, Rensselaer, Indiana. The original land was owned the George Spitler family, then purchased in 1866 by the Diocese of Ft. Wayne’s Father Joseph Stephan. Two years later, the St. Joseph’s Orphan Asylum and Manuel Training School was established with 69 orphans in 1870, but soon the boys were transferred to Lafayette and the girls to Ft. Wayne. Bishop Joseph Dwenger was the 2nd bishop of Ft. Wayne and was known for his establishment of many parochial schools in the diocese. He was eager to start a college for the undergraduate training of future priests according to A Centennial Pictorial History by Dominic B Gerlach, C.PP.S. Father Dwenger in 1887 approached the Society of the Precious Blood; he was a member. His offer was 300 acres at Rensselaer to build a college; it was to be a six-year program: high school and two years of college. The Dedication was Sunday, August 23, 1891.

In September classes began in the Administration building. It housed dormitories for 54 students, a chapel, classrooms, kitchen, sisters’ living quarters, a dining room, and offices. By early in the 1900s, there were barns, a powerhouse, a new gymnasium, Gaspar Hall, the stately chapel, a water tower, and bandstand. In 1921 the old Indian School acreage and building were added. Another power plant and high school were added and in 1936-37 school year, Saint Joseph’s College became a full four-year college. The Science Building was added, then Seifert Hall, Xavier Hall, Merlini Hall and about 1940 the Alumni Fieldhouse, now Scharf Fieldhouse. The Chicago Bears held training camp on campus from 1944 to 1974, and the film Brian’s Song was filmed on campus. Halas Hall, Bennett, Noll Hall, Gallegher and Aquinas Hall were added in the 1950s. In 1962 Halleck Center was dedicated by former President Dwight D. Eisenhower and then Schwietermann House. In 1973, the main academic administration building burned to the ground. Other buildings more recently constructed were the apartments and the Father Banet Core Building.

The Jasper County Interim Report of Historic Sites and Structures Inventory in 2002 suggested an Historic District be established for Saint Joseph’s College. The many “notable” structures are the 1914 Arts & Sciences Center, the 1962 Halleck Center, the 1900 Gaspar Hall, the 1898/1934 Grotto. The two “outstanding” structures listed are the 1888 Drexel Hall and the 1909 Main Chapel. In 2016, Halleck Center and Schwietermann Hall were added to the National Register of Historic Places. February 3, 2017, the Saint Joseph’s College Board of Trustees announced it would temporarily close as the end of this academic school year due to continued financial issues and a 27 million-dollar debt. Under new leadership as rector is Father Barry Fischer, C.PP.S. He will coordinate and oversee initiatives to re-engineer the college.

2. Remington Depot, The TPW (Topeka, Peoria and Western Railway) is located at 25 South Railroad Street in downtown Remington. The building is classified as “notable” in the Jasper County Interim Report of Historic Sites and Structures Inventory c. 1900. The two room depot had been in continuous, if sporadic, use by the railroad. Most recently it’s used for storage and as a sometime office. The building, which is roofed and sided with asbestos shingles, had not been receiving regular maintenance and is slowly deteriorating. TPW sold the depot to the town in December 2016, and Remington is rehabilitating it into a community center.

3. Independence Church, formerly a Methodist Church at County Road 375 North in Gillam Township. This fine example of quickly disappearing rural churches in the gablefront tradition was built in 1873. It is listed on the National Register of Historic Places and is classified as “outstanding” in the Jasper County Interim Report of Historic Sites and Structures Inventory. It is the oldest Methodist Church building in northern Indiana and the oldest church building in Jasper County. The building remains largely unaltered today and is structurally in good condition as it has received much good care from concerned neighbors and more recently the Independence Property Management, Inc. This group restored the broken stained glass windows, installed new electric panels and water with working bathrooms, and painted the full basement. The interior walls and floors have yet to be restored. Animals have wreaked havoc in the past, but the structure is now secure so animals cannot enter the building. The building has been painted several times over the years by neighbors and the Historic Preservation Association of Jasper County. The Efroymson Fund provided $10,000 for a new roof in 2007. This historic rural structure remains in danger without the regular presence of a responsible organization and regular use. Recently in late August each year, a large Homecoming gathering has been held to celebrate its long history.

4. North Newton Township School, located on County Road 1000 West at County Road 200 South, was constructed in 1923 and opened to students in the northern part of Newton Township in 1924. The four room building, of typical rural school architecture still has its bell tower and original walls. It is rated as “notable” in the Jasper County Interim Report of Historic Sites and Structures Inventory. The school was closed after the 1962-63 school year and has been vacant ever since. Considerable uncontrolled overgrowth jeopardizes the future of the structure and its preservation as a symbol of a way of Jasper Country life in the early to mid-twentieth century. Preserving the structure will require action to seal the building from the elements, removing the overgrowth, and finding a feasible reuse for the building.

5. Union Township School/Parr School was built in the craftsman style in 1917 to replace a one-room building. It was designed by Samuel Young, architect, and built by contractor Wiley and Sons. The new building had three rooms. In 1938 a small gymnasium with a stage was added. The school was closed in 1965. The front of the school remains the
same, however the gymnasium roof appears to be collapsing. The lack of maintenance jeopardizes the future of the structure. Its preservation is a symbol of a way of Jasper County life in a small town in the first half of the twentieth century prior to consolidation of schools. Its present use is unknown. The 2002 Jasper County Interim Report of Historic Sites and Structures Inventory listed the Union Township/Parr School as “notable”.

6. Forsythe-McMahon House, 226 East Washington Street, Rensselaer. Located prominently at the intersection of Washington Street and McKinley Avenue, this former elegant brick house of Free Classic architectural style is an important architectural anchor to the historic character of downtown Rensselaer. It was built in 1895 for Mr. and Mrs. B.F. Forsythe. Mr. Forsythe was an important Rensselaer businessman. After suffering a fire in the attic in the 1970s, the house remains vacant. While the fire damage has been repaired, the structure has been allowed to deteriorate. The house, listed in the Jasper County Interim Report of Historic Sites and Structures Inventory as “notable”, has been reviewed by experts from the Indiana Landmarks for estimated rehabilitation needs. Since the property first appeared on previous Ten Most Endangered Lists, the house has been sold to a new owner who has carried out some restoration work. However, it needs to have more complete restoration for a useful new life.

7. Rensselaer Water Treatment Plant Well House #1, 210 North College, Rensselaer. This Craftsman style well-house was built in 1935. It was listed as “notable” in the Jasper County Interim Report of Historic Sites and Structures. It is now used for storage only, and it appears to have some deterioration. Can this structure have a new use before more deterioration occurs?

8. Evans Farm, 700 West and 1350 North in Keener Township dates from the late 1880s and early 1890s when it was the headquarters location for the vast Northern Indiana Land Company. The property now consists of 320 acres, but the three-story gable front house that served as the bunkhouse and Land Company headquarters was torn down in recent years. The home was vacant for the last 20 years. There still is a corncrib that was originally a horse barn, and a large livestock barn build in 1920. The farm is listed as “notable” in the Jasper County Interim Report of Historic Sites and Structures. The historic structures need some maintenance and some rehabilitation.

9. Henry Barkley Farm, 1121 West and 150 South in Barkley Township. The 1840 home appears to be a Doublepile design that suggests it was a two story home being two rooms wide and two rooms deep with a central passage running from front to rear. This is possibly the oldest home in Jasper County built for the Barkley family. The outbuildings include a livestock barn, milk house, privy, and a wind mill. Because of its very early construction in Jasper County history and that it belonged to an important early family, whose family name was attached to the Township and the early Barkley Methodist Church, it is important to have this landmark maintained and preserved. In the Jasper County Interim Report of Historic Sites and Structures, it is listed as “notable”.

10. Jasper County Barns, 1840 to 1950. Farming continues to be big business in Jasper County. With increased number and size of farm equipment and large livestock, old barns are not as useful as they once were. Maintaining old wooden barns can be cost prohibitive when a new roof, which is key to a barn’s stability, may cost from $10,000 to $20,000. Barns built in the 19th and early 20th century are endangered as shown by the Jasper County and Remington “outstanding” Bank Barn that was recently lost to salvage. That Bank Barn was listed as “notable” in the Jasper County Interim Report of Historic Sites and Structures. The barn was not going to be restored for the Remington Park because of its poor condition and the high cost of maintenance and restoration. Our elderly wooden Jasper County barns are located on private property, and in many cases are difficult and costly to maintain. In the last 60 years, hundreds of Jasper County barns have been torn or burned down. The barns need new uses, as exemplified by Jordan Township’s Carpenter Creek Cellars retail structure. Other barns have been made into homes and private recreational facilities.