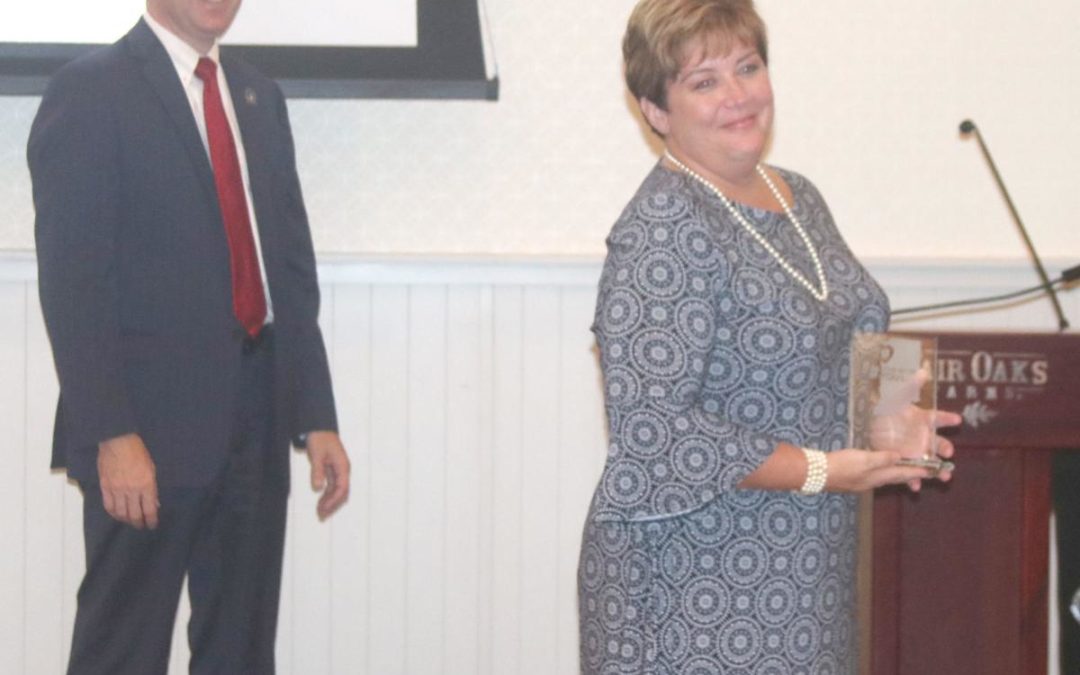 FAIR OAKS — The annual Jasper/Newton Foundation Gala was held Saturday night at the Farmhouse Restaurant at Fair Oaks Farms in Newton County. This year, following the theme for the foundations, “Love Where You Live” campaign, awards were given to three people from Jasper County and four from Newton County. All were honored for their community involvement.

Heather Tokarz, office manager for the Town of DeMotte, received the award for her work in assisting the Friends of DeMotte Parks procure a grant from the foundation to improve playground equipment from Spencer Park. Foundation Executive Director Brienne Hooker said, “If you have a dream, want to build a park, save some animals, start a new group, find something, share a passion, help your community, you call Heather. When someone from the DeMotte area calls my office to say, ‘I think we need to do this’ or ‘how can we help with this project?’ or ‘who knows what we should do?’ I say, ‘You need to call Heather Tokarz at the Town of DeMotte.’”

Photo by Gregory Myers
Heather Tokarz, Office Manager for the town of DeMotte, stops for a photo after receiving the “Love Where You Live” award from State Sen. Brian Buchanan (left) at the Season of Giving Gala Saturday night. The gala was hosted by the Jasper/Newton Community Foundation.

She said Tokarz had blisters on her hands from spreading out mulch at the last minute before they cut the ribbon on the new playground equipment put in place during the summer of 2017. Three ladies, Leann Doffin, Jenny Jonkman and Silviya Stout formed the Friends of DeMotte Parks to raise money to replace the aging equipment at Spencer Park. The women didn’t know each other before Tokarz brought them together, knowing they all had the same interests in mind.

She helped the ladies along the way as they pursued avenues to raise the funds they needed.

“I don’t know how she does it, but she’s the woman. She knows people, she works hard, she gets things done. Because someone like you, Heather, cares a whole awful lot, DeMotte is heading in a great direction,” Hooker said.

Remington resident, Dana Pampel, received the award for her help in building the town’s new walking path and park improvements. “If you look up the word ‘gumption’ in the dictionary – there you will find a picture of Dana Pampel. Remington and the southern part of Jasper County have many reasons to celebrate arts, culture and community each year because of the work Dana does. I think she might be on every committee of every event ever held there,” Hooker said.

PHOTO BY GREGORY MYERS
Remington go-getter Dana Pampel receives the “Love Where You Live” award from State Sen. Brian Buchanan, who gave the award on behalf of the Jasper County Community Foundation at the Spirit of Giving Gala Saturday night.

Guest speaker for the night was State Sen. Brian Buchanan, who replaced Brandt Hershman after he retired from the senate. To go with the theme of the night—Love Where You Live, Buchanan spoke about why he loves to live in Indiana.

“Hoosier values, Hoosier Hospitality and respect for tradition are some of the main reasons why I love and am proud to live in Indiana,” said Buchanan. “I love the great variety in Indiana from our sporting to cultural events. As far as festivals and fairs, no one does it better than Indiana. I have learned that if you want to see a lot of people in a community show up to their county hog show.”