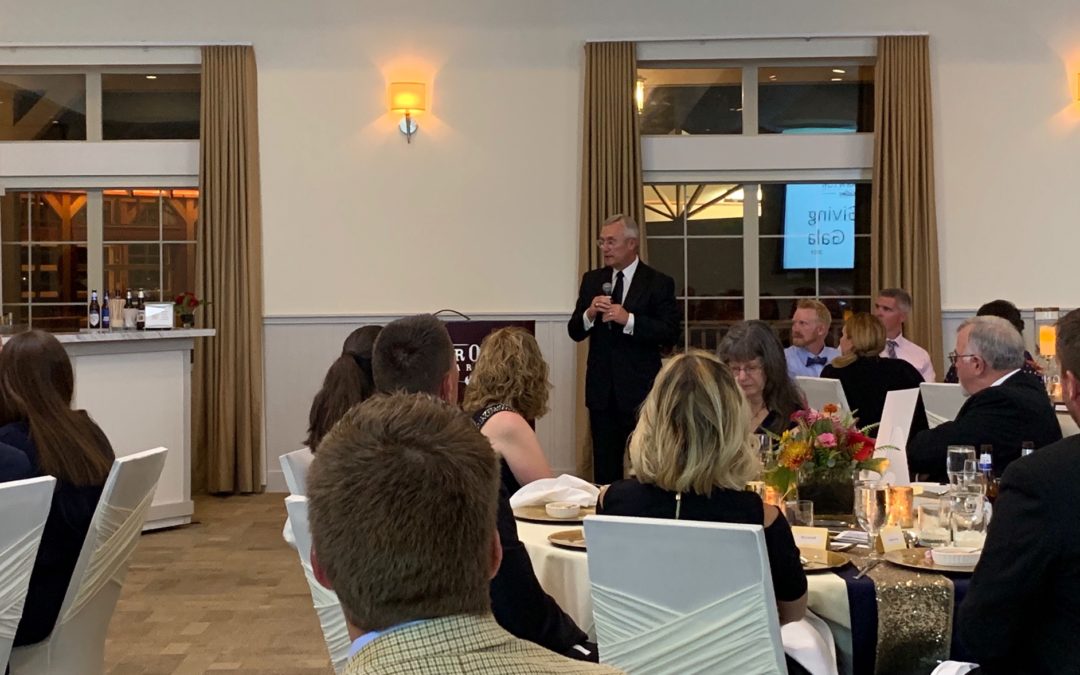 FAIR OAKS – We, the Jasper Newton Foundation, held our annual Season of Giving Gala at Fair Oaks Farms on September 21. More than 150 of our friends and neighbors gathered to celebrate our two-county community and the Foundation’s ongoing mission to create a legacy of caring and giving that connects people to their communities.

The event was also a celebration of our more than 76 Lilly Endowment Community Scholars from Jasper and Newton counties. The program was started by the Lilly Endowment, Inc., in 1998 to raise the level of educational attainment of Indiana residents by awarding full-tuition to one of Indiana’s finest colleges or universities plus an annual book stipend. Eight Lilly Scholars attended the Gala as guests of the Foundation: Lindsey (Penny) Ackridge, Kelly Cochran, Sara (Conn) DeYoung, Courtney Feagans, Ashley (Hayworth) Hopp, Ross Kindig, Bridget McClatchey, and Cliff Robinson.

Former Ohio State University head football coach Jim Tressel, who now serves as president of Youngstown State University, gave the keynote address. He expressed his admiration for Jasper and Newton counties, noting that as much as he enjoys living on an urban college campus, he dreams of someday living on a farm. Echoing the spirit of the Jasper Newton Foundation’s “Love Where You Live” campaign, Mr. Tressel noted the importance of believing in and caring about one’s community, wherever it happens to be. One of his favorite quotes, he said, was from the writing of Voltaire: “Paradise is where I am.”

Mr. Tressel also emphasized the importance of maintaining perspective. Using his football coaching days as an example, he said, “When our team was winning a lot, it was tempting to listen to all those voices saying how great we were and believe them. And when we weren’t doing so well, it was tempting to believe those other voices that said we were no good.” He explained that no matter how important an individual, team, or organization believes it is, it’s important to keep the bigger picture in mind.

In her remarks, Jasper Newton Foundation Executive Director Brienne Hooker spoke about the Foundation’s renewed effort to learn and address our community’s most urgent needs.

“We are leading the charge on a few issues,” Ms. Hooker said. “Our donors are not thinking ‘legacy gifts’ as much as they are thinking about what we can change right now to improve the quality of the life we share and improve the attractiveness of our communities, and in the process, raise the tide for every human here.”

Ms. Hooker announced The 100 Campaign, an effort to maximize a major offer by Lilly Endowment, Inc., which will give $2 for every $1 donated to each county’s Community Fund. The Jasper Newton Foundation uses the Community Funds in each county to give grants to local nonprofits.

If The 100 Campaign is successful, our community will have raised an additional $300,000 for our local nonprofits before the end of this year.

Though the Gala was both a celebration of giving and a chance to give, more than anything it was an invitation for every person in the room—and in our community—to become involved.

Ms. Hooker admitted that she knows that getting involved and making an impact requires a lot of time and a lot of work.

“The frustration, the inconvenience, and the responsibility we have for being better people is worth it,” Ms. Hooker said. “Our communities depend on it.”